Start a Wiki
AR Cards (short for Augmented Reality Cards) are cards that were manufactured for compatibility with the Nintendo 3DS. By scanning a Kid Icarus AR Card to a copy of Kid Icarus: Uprising, the player will receive an Idol, as well as 100 Hearts.

According to Masahiro Sakurai, the 3DS's camera recognizes the images on AR Cards at a resolution of 4 by 4, and reads the "colorbit" at the bottom left-hand side of the card.[1]

By scanning an AR Card, an animated 3D model which corresponds to the card will appear on screen. When scanning two AR Cards at once, the player can position them so that the arrows at the bottom of the cards face each other, causing the two cards to engage in battle.

Most of the cards were available through booster packs, though a handful of others were obtainable through different means.

Some were available through Club Nintendo, in strategy guide books, in various magazines, in first edition versions of the 3 disk soundtrack, packaged along with Pit and Dark Pit's Figma figures, and other, more obscure means.

Initially, AR Cards 405 and 411 (Medusa (Rare) and Pit (Victory) respectively) were never released physically, making their Idols only obtainable through hacking—however, Pit (Victory) was made available digitally on December 4th, 2018 when Kid Icarus: Uprising's official Twitter account revealed the full AR Card in celebration of Super Smash Bros. Ultimate's release.[2] Whether or not Medusa (Rare) will be released is currently unknown.

The code at the bottom left corner of AR Cards always begins with the letters AKD; however, the last letter in the code is dependent on region: AKDE is used for North American cards, AKDP is used for PAL cards, and AKDJ is used for Japanese cards.

North American and Japanese AR Cards have completely identical appearances, with the exception of their names and codes. PAL AR Cards are notably different from these two, with a colored border around the card's image, multiple different translations listed below the name of the card, and a lack of affiliation listed above the card name. Additionally, only PAL versions have a wing in the top right corner to signify a card's rarity, with a silver wing signifying uncommon, a golden wing signifying rare, and a diamond wing signifying ultra rare.[3]

Prior to Uprising's release, beta cards of Pit, Palutena, and Medusa were given out at E3, San Diego Comic-Con, PAX Prime, and a Las Vegas, NV GameStop Conference in 2011. All three of these cards featured different art of each character, the beta logo of Uprising, and lacked a colorbit in the bottom left corner. However, despite the colorbit's absence, the cards can still be scanned.

There are also beta cards of Magnus, Hewdraw, Dark Lord Gaol, the Fighter, a Monoeye, a Stackjaw, a Fire Wyrm, a Syren, a Mik, a Skuttler, the Standard Orbitars, the First Blade, the Violet Palm, the Crusher Arm, the EZ Cannon, the Tiger Claws, and the Fortune Bow; however, any information regarding whether or not these were ever distributed to the public is currently unknown.

Copies of Kid Icarus: Uprising came with a pack of six randomly selected AR Cards, which can be identified by the unique CXA code located in the bottom right corner of the card. 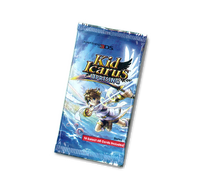 Retrieved from "https://kidicarus.fandom.com/wiki/AR_Cards?oldid=49538"
Community content is available under CC-BY-SA unless otherwise noted.