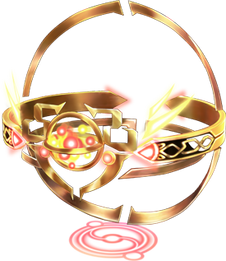 The Aether Ring is a new vehicle introduced in Kid Icarus: Uprising. It is one of the three standard vehicles introduced in the game, the other two being the Exo Tank and the Cherubot.

The Aether Ring is relatively rare in Kid Icarus: Uprising. Pit stands in the middle, hovering slightly above the ground while maneuvering the Aether Ring around, using what looks like a sphere. The Aether Ring bounces off of walls on collision and slowly floats downward during descent.

It is equipped with a rapid firing gun that Pit can use against enemies. Additionally, the Aether Ring has a protective shield that can be initiated by tapping an icon on the touch screen. The shield can be used to block attacks and can also be used to kill enemies if an enemy touches the shield. There are some achievements that can be unlocked by killing a set number of enemies with the Aether Ring's shield.

The Aether Ring is a vehicle of the gods that can move around freely. While the vehicle may look like a gyro top to Pit, its heavenly status masks it from humans, who only see a useless pile of rocks. 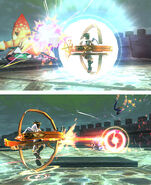