The Armin (アーモス Āmosu, "Armors") is an Underworld enemy in Kid Icarus: Uprising.

The Armin is a frail, pale pink and teal monster resembling a plucked chicken, though the spiked armor on its face and tail lends it a far bulkier appearance.

This armor is dark brown with red and yellow patterns, and its face plate is shaped like a butterfly, while the armor around its tail resembles a flower.

Exclusively appearing in Land Battles, the Armin's strategy is simple—charge into its foes and strike using its armored face, while occasionally rolling to the side to fake out its opponents. However, if it charges into a wall, it will become temporarily stunned and expose its vulnerable sides.

At first, Armin appears to be quite the invulnerable beast, protected in front and back by heavy plates. However, from the side its true puny body is exposed, exposing this Underworld monster for the weakling it really is.

AR Card of the Armin. 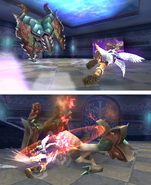