The Belunka is a green, whale-like monster with a light purple underbelly. It has red eyes, which matches its gold and red crown, and the accessories on its tail and underside.

The Belunka is incapable of directly attacking its foes, only possessing the ability to spawn enemies through its enormous mouth. The inside of its mouth also serves as its weak point.

Belunka is a living troop transport that loads smaller Underworld forces in its mouth—also its weak point—and then vomits them out onto the battlefield. Take down Belunka, and you'll also destroy all the enemies inside!

AR Card of the Belunka. 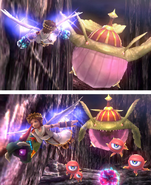