Beta content is a component of gaming that pertains to pre-release and unused content. This may range from unused enemies to prototype designs, which are typically found within the game's files or displayed in early footage or demos.

Within the game's manual is an early screencap with a black screen containing the words "Game Over." In the final version, the words that appear during a game over are "I'm Finished!"[1]

The front cover of the game possesses two enemies that are not present in the final game—a brown and yellow creature with wings, and a yellow and orange creature with spikes. Though the origins of the former creature are unknown, the latter bears a resemblance to the Holer.[2]

The back cover categorizes the game as a "two player alternating game" despite the game's functionality as a single player game. Whether or not this is a remnant of a feature that was removed during development or simply an error is unknown.[3]

In addition, screencaps on the back cover of the game show the health bar was colored blue instead of red before release.[3]

Three rooms that resemble layouts from the original Kid Icarus remain unused amongst the game's files, possibly used for testing purposes during earlier stages of development.[4]

Among other boss graphics are two unused bosses—a goat and a lion. Due to their placement in the game's files, they were likely scrapped or placeholder Fortress Guardians.[4]

Within the files for the Sky World Tower is an unused platform. The reason for its exclusion is unknown.[4]

The game also includes an incomplete katakana set, likely intended to be used for a Japanese translation of the game.[4]

There were minor differences between Pit, Palutena, and Medusa's pre-release and finalized artwork—Pit lacked the cowlick in his hair and the side of his chiton appeared to be more closed off, while Palutena and Medusa's artwork were simply less refined.

In addition, the pre-release artwork for the Power of Flight differs from the finalized version, lacking the second glove and emblem that typically accompanies the Palutena Bow on Pit's right hand.

Pre-release videos, demos, and other related media of the game used a beta logo for Uprising, which was significantly more simplistic than the finalized version—while this logo contained black text with no color variation and the Palutena's Army symbol in the top right corner, the finalized version uses gold and blue text with a wing shape in the top right corner instead.

There were also several alterations made to character and enemy designs prior to the release of the game, such as the Syren obtaining a chest plate where one was absent beforehand. Additional purple parts were added around Amazon Pandora's chest and hips, and what was presumably the Taklax was given an entirely new design altogether. The Monoeye had slightly longer tentacles protruding from its body, while the Mega Mussel appeared to contain nine pearls instead of three. 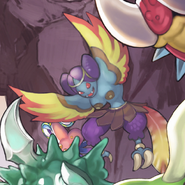 Amazon Pandora's concept art, featuring art of her without the additional purple parts.

Presumably a beta design for the Taklax. 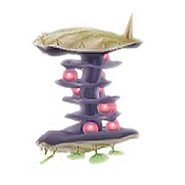 During E3, several beta AR Cards were shown, some of which were distributed to the public. All of these AR Cards use Uprising's beta logo and lack the colorbit in the bottom left corner, while some feature different character art and names from their finalized designs. 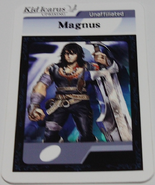 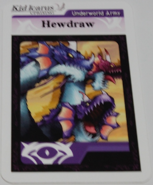 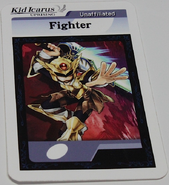 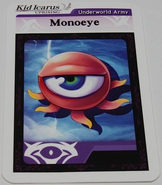 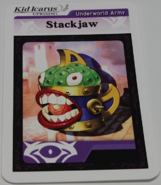 Many changes were made to the game between the initial development period and the game's release, some of which were shown in a book written by Masahiro Sakurai. The book features several screencaps that were taken during production, many of which appear to be comedic in nature. 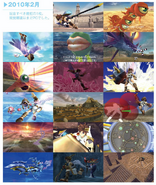 Within the game's files is an unused power named Mystery, which is unable to be equipped due to its lack of shape on the power board. Attempting to equip it will simply result in an error message claiming that the player is unable to place any more blocks.

In early footage, Palutena had a different voice actor and Pit was voiced by Troy Lund. Powers were referred to by their Japanese name, "Miracles," which gave the Power of Flight the name "Miracle of Flight" instead.

In early demos, the in-game portraits were shown as small squares on the top screen, the few playable chapters had entirely different banner designs, and demos lacked the club category for unknown reasons. In addition, the Great Reaper was known as its Japanese name, Big Reaper, and Palutena had given it the nickname "B.R."

A dummy voice file can be found within the game, likely used for testing audio during early stages of production.

Pit: I can hardly believe my eyes!
Palutena: Set it to your liking.

This dialogue likely refers to the Nintendo 3DS's 3D slider.

Likely a continuation of her instructions at the beginning of the Land Battle portion of the chapter.

An audio file of a short laugh from Magnus.

Palutena: I'm readying my Palutena Glam Blaster for deployment. Once preparations are complete, I will launch an attack.
Pit: You don't have to do that! Let me handle it.

While this piece of dialogue is used in-game, this specific file cuts out part of the conversation.

Pit: Whoa!
Palutena: Now this looks familiar. ...But it's not exactly the same.
Pit: Whatever. We have to move forward! We have to defeat Medusa.

Vague dialogue that overlaps slightly, which was likely intended to be used when Pit enters one of the commander's chambers.

Palutena: And here's that backup I mentioned!

Dialogue that was likely intended to be used as a continuation of her previous statement about sending Pit backup.

Pit: What are those centurions doing?! Why are Palutena's troops attacking the town?

Unused dialogue of Pit realizing that Palutena's Army is attacking the Decimated Town earlier than intended. It lacks an echo effect and the dialogue overlaps.

Pit: What is going on here? I've gotta get to the bottom of this!

Likely a continuation of the former audio file, lacking an echo effect.

Pit: Oh, man—this can't be happening. How am I attacking humans? Everything's gone off the rails!

Similar dialogue to a line spoken in-game, only Pit acknowledges he's attacking the humans instead of questioning who he's attacking. It also lacks an echo effect.

Pit: Now what am I supposed to do? Take myself down? I guess I don't have a choice!

This dialogue is used in-game, but this specific file cuts off part of the conversation and lacks an echo effect.

Magnus: There was a war between the Underworld and the Forces of Nature. Early in the war, Palutena's Army vanished. That was three years ago.
Pit: Three years? That's...over a thousand days!
Magnus: Yeah, thanks for the math lesson. Anyway...when Palutena's forces reappeared, they began launching attacks across the land. As you can imagine, this was a shock to the humans. No one knows what happened. Did your goddess just lose her mind?
Pit: Don't ask me. I've been a ring. But I know I have to do something. There must be some way we can reason with her.
Magnus: It's possible that someone else has taken over her entire army.
Pit: OK, first things first. That guy attacking the town? That wasn't me.
Magnus: So your mind is here, but your body is over there destroying stuff? Isn't that convenient. Tell that to all the people your body just killed.
Pit: Look, I didn't exactly plan it this way.
Magnus: Whether you did or not, there's nothing I can do for you now. You've got my body. So you're going to have to get rid of the other Pit. Ironically, that's why I was here in the first place.
Pit: Well, if that's our only option, I guess that's the plan!
Magnus: Careful with my body, though. I'm gonna need it later.

Magnus: I guess she must have heard you.

While this piece of dialogue is used in-game, this specific file cuts out part of the conversation.

Viridi: Well, this is a nice design flourish.
Chariot Master: No. It's a practice track for the Lightning Chariot. It's not for amateurs!

While this piece of dialogue is used in-game, this specific file cuts out part of the conversation and the dialogue overlaps.

Viridi: As you know, Reapers are responsible for carrying souls.
Hades: But we've got an excess of souls these days. The Reapers can't handle them all!
Dark Pit: So the extra souls come here?
Palutena: Yes, though some just fade away. And others are...well...eaten.
Hades: Even in the afterlife, it's survival of the fittest!
Viridi: That makes some sense. The weak are consumed, just as nature intended.

While this piece of dialogue is used in-game, this specific file cuts out part of the conversation and lacks an echo effect over Palutena and Viridi's voices.

Hades: Pardon me, if you will. I must go entertain my guests.

While this piece of dialogue is used in-game, this specific file cuts out part of the conversation and lacks an echo effect.

Pit: Hello? If Viridi's army is attacking, they're doing it awfully quietly.
"At least I'M doing something, Pit. You're such a slacker. Ugh!"
I really need to stop talking to myself.

While this piece of dialogue is used in-game, this specific file overlaps dialogue.

Palutena: Thanks, Viridi.
Viridi: Don't thank me yet. Get your heads back in the game! Let's finish this once and for all!

While this piece of dialogue is used in-game, this specific file cuts out part of the conversation and lacks an echo effect.

Retrieved from "https://kidicarus.fandom.com/wiki/Beta_content?oldid=49809"
Community content is available under CC-BY-SA unless otherwise noted.