The Blader is a vaguely humanoid, plant-like creature with a single yellow eye. Though mostly teal in color, it also possesses green and yellow accents, as well as pink and orange leaves which serve as both its weapons and wings.

While gliding in the air, the Blader will fire green lasers from its eye, which deal insignificant amounts of damage. When walking on land, it will resort to using its blade-like wings to slash at its foes.

These elite Forces of Nature soldiers can change their form to suit either land or air battles. This helps Bladers adapt their tactics to any condition, even fleeing if necessary. They also serve as field commanders, doling out simple orders.

AR Card of the Blader. 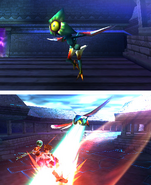 Retrieved from "https://kidicarus.fandom.com/wiki/Blader?oldid=47553"
Community content is available under CC-BY-SA unless otherwise noted.