The Boom Stomper (ドスドス Dosudosu) is a Forces of Nature enemy that debuted in Kid Icarus: Uprising.

The Boom Stomper is a tall, rock-like monster with cream-colored runes engraved on its body. It has two root-like legs, moss located near the top of its body, and a single sprout poking out from the moss.

From afar, the Boom Stomper will hop into the air and slam down, creating a large shockwave. At close-range, not only will it use the former attack, but it will also walk towards its foe and attempt to topple over them. Both of these attacks knock foes back significantly.

A gigantic mass of rock inscribed with runes and given the gift of life. With its tremendous weight, walking is a struggle. Yet Boom Stomper uses this bulk to its advantage by toppling onto its foes as a heavy attack.

A giant rock bestowed with the gift of life. It usually stays still—as rocks do—but if it catches sight of you, it'll slowly move after you and try to stomp you into the ground. Its stomping also causes shock waves that will harm any fighters in the vicinity. Its weak point is the little leaf on its head!

AR Card of the Boom Stomper. 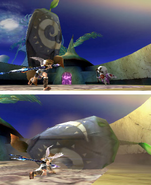