The Cancer Claws are a pair of large, silver weapons that fit the user's hands like boxing gloves. Shaped like a crab's pincers, these two-pronged claws possess ornate decal, blue accents, and a single red jewel on each claw.

The Cancer Claws are weapons the player can use in-game, which can be unlocked by accessing the Cancer Zodiac Chamber in Chapter 8 and taking the weapon inside. Once unlocked, it can be obtained as loot or through fusion.

The Zodiac weapon bearing the sign of Cancer. Their melee attack packs a mighty wallop, and their charged shots can temporarily hover near enemies. They also give users a speed boost during continuous-fire attacks. 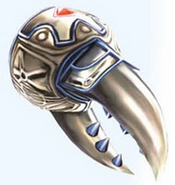 Artwork of the Cancer Claws.

AR Card of the Cancer Claws.

Retrieved from "https://kidicarus.fandom.com/wiki/Cancer_Claws?oldid=51225"
Community content is available under CC-BY-SA unless otherwise noted.