Centurions (イカロス Ikarosu, "Icarus"), formerly known as Centurians,[1] are the rank-and-file soldiers of Palutena's Army that debuted in the original Kid Icarus.

Serving Palutena as mere grunts in her personal guard, the Centurions are fragile and only pack a punch in numbers.

Centurions are small yet muscular, standing at a height of only 3'9" (115 cm[2]). They have round faces with squinted eyes, and wear gold helmets with wings poking out from either side. They also wear simplistic brown tunics, and bracelets and sandals to match. In addition, they wield bows that are much larger than their own bodies.

There are three types of Centurions:

Centurions are found in abundance as petrified statues in fortresses. Should Pit hit one with a Mallet, he will be freed and join Pit during the fight against a Fortress Gatekeeper. Centurions stay in a flying formation of three at a time and fire at the same time as Pit, but they fall after receiving a single hit.

Unlike the previous installment, Centurion statues are found in virtually every stage. Centurion statues contain items, most notably Palutena's Keys and Goblets. In fortresses, they may hold Pencils, Maps, and Torches.

Palutena briefly mentions that other than Pit, she only has the Centurions to rely on, and wonders if she should open a boot camp to toughen them up.

When Pit's Power of Flight runs out and he begins to plummet towards the earth, he is caught by a group of Viridi's troops. However, they too eventually fall, forcing Palutena to summon a pair of Centurion Strongarms. The Strongarms carry a small platform, allowing Pit to continue through the Aurum Brain Fortress until he arrives at the central room housing Aurum Pyrrhon. Pyrrhon will not attack the Strongarms that carry the platform that Pit is standing on, allowing the angel to focus on attacking and avoiding damage.

Chapter 18: The Ring of Chaos

After Palutena falls under the Chaos Kin's control, the Centurions, Centurion Strongarms, and Centurion Knights all attack the Decimated Town under Palutena's orders.

While traversing through the town in the body of a dog, Pit stumbles across Magnus and finds that he is fighting off a group of Centurions.

Once Pit takes control of Magnus's body, he fights through hoards of Centurions in order to confront and reclaim his own body.

Copies of the Centurions appear in the Chaos Vortex, created by the Chaos Kin in order to slow Pit down as he pursues it.

Copies of the Centurions appear in one of Pit's trials, created by Dyntos to help test the angel's abilities.

Pit's Final Smash summons a hoard of Centurions who flood the stage, each of which packs a mighty punch as they smash into other fighters. Unlike their appearance in the original Kid Icarus, they do not attack with their bows.

The Centurion appears as a collectable spirit in the game's aptly named Spirits mode.

The Centurions serve as silent secondary characters in Palutena's Revolting Dinner. They are initially summoned by Pit to assist in destroying the animate vegetables. However, while they are gone, the vegetables return to attack Palutena directly. They are finally seen at the end of the episode searching for Palutena in the ruins of the temple.

The rank-and-file troops of Palutena's personal guard. They fly through the air, attacking enemies in great numbers. While their attacks are weak, their flying ability far exceeds Pit's. Word has it they can even be revived if shot down.

The standard soldiers of Palutena's Army, Centurions make up in loyalty and number for what they lack in power. They have time and again fallen victim to a curse that turns them to stone, but the head of Palutena's guard, Pit, saves them with the use of a stone-breaking mallet. 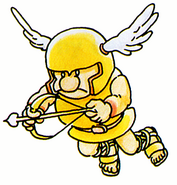 A Centurion as he appears in the original Kid Icarus.

A Centurion statue as it appears in Of Myths and Monsters.

AR Card of a Centurion.
Add a photo to this gallery

Retrieved from "https://kidicarus.fandom.com/wiki/Centurion?oldid=49488"
Community content is available under CC-BY-SA unless otherwise noted.