Cherubot is a tall, mech-like vehicle which becomes compact when inactive. It slides along the ground despite having two legs, and possesses a large halo behind its cockpit. Cherubot's left arm is a cannon used for ranged attacks, while its right arm is equipped with a large, red sphere for close-quarters combat.

Fueled by renewable goddess power,[1] Cherubot's strongest attribute is its melee attack. It possesses the ability to jump into the air by the push of a button, which is capable of damaging foes with shockwaves upon landing. To make up for its strength, its movements are sluggish, and its formidable size makes it impossible to fit into narrow passageways.

While it may look cool, the overwhelming destructive might in this combat armor of the gods is best left to seasoned warriors. Cherubot's compact form factor and self-propulsion make it easy to deploy into battle, if at limited mobility. 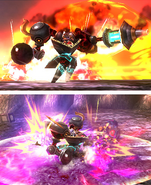 Retrieved from "https://kidicarus.fandom.com/wiki/Cherubot?oldid=47738"
Community content is available under CC-BY-SA unless otherwise noted.