When inactive, the Clobbler takes on the appearance of an innocuous apple-like creature with legs, possessing brown shoes and a stem with leaves atop its head.

When active, its form grows more grotesque, appearing as a massive, lumpy creature with a withered stem. It has two teal arms, which possess a yellow eye on the tip of each finger.

Most often found in Land Battles, the Clobbler typically walks around aimlessly, making no attempt to harm its opponents. However, if it's attacked or merely touched, it transforms and becomes extremely aggressive. It will charge at its foes and ruthlessly swing its arms at them, causing a significant amount of knockback on contact.

After a short period of time, it will turn back to its harmless form and will not attack unless provoked again.

The Clobbler is usually a meek creature living a modest life of restraint. But once angered, it blows up and mutates into an aggressive monster. Those who incur the Clobbler's wrath are advised to run for three days to give it time to calm down. 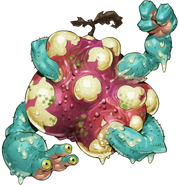 Alternate art of the Clobbler.

AR Card of the Clobbler. 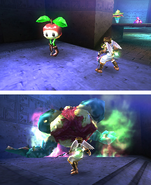 Retrieved from "https://kidicarus.fandom.com/wiki/Clobbler?oldid=46996"
Community content is available under CC-BY-SA unless otherwise noted.