In the original Kid Icarus, the Collin resembles a Centurion with bulky gold armor and white wings on its back.

In Uprising, it retains its former appearance with some minor differences—it no longer has wings, and it possesses additional armor, a red cape, and two cannons from which it launches Phils.

Found in the Skyworld stage, the Collin hovers in the air, summoning EelEyes to fly around it and ram into its opponents. Once it has been defeated and its hearts have either been acquired or disappeared from the screen, any remaining EelEyes will disappear as well.

Similar to the original Kid Icarus, Collins rely solely on the power of their Phils to damage foes. Though they initially seem invulnerable, players can damage Collins by deflecting their Phils back at them with a melee attack.

Once soldiers in Palutena's army, Collins are now cursed to fly around firing the poisonous Phil bugs that live inside their bodies. They can be defeated by using melee attacks to knock Phils back at them. 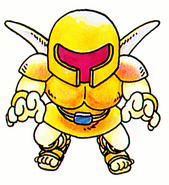 The Collin as it appears in the original Kid Icarus. 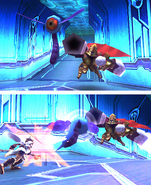