Cragalanche the Mighty (剛力のロッカ Gōriki no Rokka, "Rigid Rocker") is a large, rock-like monster that debuted in Kid Icarus: Uprising.

Acting as one of Viridi's commanders in the Forces of Nature, Cragalanche serves as the boss of Chapter 11.

Cragalanche appears as a large creature made up of gray rock, and stands at a height of around 16'5" (500 cm[1]). He has short, stubby legs and brown, club-like arms, and possesses face-like features with glowing red eyes. He also has a glowing red mark on his backside where the rock on his body has broken away.

After Pit and Palutena attempt to fight against the Forces of Nature, Viridi sends Cragalanche to the Reset Bomb Forest to stop them. Upon Pit's arrival, Cragalanche emerges from a giant pile of rocks and the two engage in battle. After his defeat, Cragalanche falls apart and his remains are teleported away.

A replica of Cragalanche appears in one of Pit's trials, created by Dyntos to help test the angel's abilities.

Cragalanche's battle style remains predictable throughout the entire battle, but will become faster as the battle progresses. He begins by either pounding the ground with his fist to send three thin shockwaves, or throwing a rock at Pit. He will then roll towards him and either levitate above him and slam down, or twirl at Pit and crash into the ground. He might also enlarge his fist and punch Pit. If Pit attacks his weak spot, Cragalanche may fall down and become temporarily vulnerable. Once he recovers, he will slam into the ground, creating a small shockwave around him.

After he has taken enough damage, he surrounds himself with rocks and sends them flying in all directions. His previous attacks also act differently during the second half of the battle: his fist pound attack will now be able to send two sets of three shockwaves rather than the one set from before; his rock throw attack will use a much larger rock; and his punch instead becomes a wide arm sweep, which can be interrupted by striking the red weakpoint that appears on his arm during this attack. He can also burrow into the ground and attempt to resurface into Pit, or slam his body into the ground in front of him to send out a far-reaching earthquake.

Once a mere stone with a soul, Cragalanche has grown into a mighty warrior for the Forces of Nature. You can trust him with your darkest secrets because he is a rock and can't speak. He needs no words to assure Viridi of his loyalty, though—she can see it in his glowing red eyes.

A commanding officer in the Forces of Nature. Once a mere boulder with a soul, Cragalanche spent years developing a will of his own. Fiercely loyal to Viridi, he strikes at the front lines of battle like a meteor. 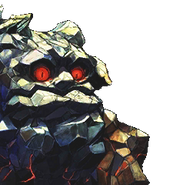 Cragalanche, before his fight in Chapter 11.
Add a photo to this gallery

Retrieved from "https://kidicarus.fandom.com/wiki/Cragalanche?oldid=51374"
Community content is available under CC-BY-SA unless otherwise noted.