Daphnes are Underworld enemies that debuted in the original Kid Icarus.

In the original Kid Icarus, the Daphne appears as a large, green-and-yellow flower with thorns on the tip of each petal.

In Uprising, it appears as a small flower creature with orange petals on its head, two leaves for arms, and a pair of small legs. Though it initially seems to have a face with blank white eyes, its true face lies hidden within its petals, where it has black eyes attached to blue eyestalks, a gaping hole from which it spews its bombs from, and three blue tendrils underneath.

Appearing in the Palace in the Sky, Daphnes appear in groups of four and fly upwards to ambush their enemies.

Despite its description in the game manual, it does not possess the ability to poison Pit.

In Air Battle and Land Battle, the Daphne will cast out flower-like bombs at its opponents, which cause significant knockback once detonated.

Daphnes look like adorable flowers until they attack, revealing their terrifying true faces. They defeat their enemies by scattering explosive "Daphne mines" then move in to gobble up the remains.

The Daphne as it appears in the original Kid Icarus.

AR Card of the Daphne. 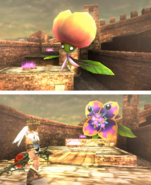