Resembling a pitcher plant, the Dibble Dop is a green and blue monster with a single yellow eye. Though its body appears slender at first, its mid-section inflates with water when it readies an attack.

The Dibble Dop's only strategy for attack is firing water balloon-like projectiles at foes. These projectiles explode on contact, which then summon a small pillar of water that is capable of knocking back opponents.

While Dibble Dop looks like a pitcher plant, it doesn't capture and eat bugs. Rather, it stores up moisture in its pouch and then launches it out in the form of a water bomb. This water is even magically condensed to make it extra damaging!

AR Card of the Dibble Dop. 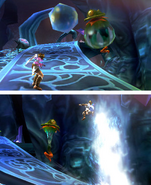 Retrieved from "https://kidicarus.fandom.com/wiki/Dibble_Dop?oldid=46597"
Community content is available under CC-BY-SA unless otherwise noted.