Start a Wiki
Dyntos (神器神ディントス Jingi-shin Dintosu, lit. "Sacred Treasures God Dyntos") is the God of the Forge. Though he appears to be an elderly man, he is an incredible craftsman and is able to perfectly replicate monsters, bosses, and weapons.

He is the creator of the Three Sacred Treasures and the Great Sacred Treasure, as well as the majority of the weapons available in Kid Icarus: Uprising, with the exception of the Silver Bow, Palutena Bow, Viridi Palm, and Dark Pit Staff.

He is voiced by Alan Oppenheimer in the English version of Uprising.

Dyntos appears as a bald, elderly man with a long, white beard and mustache. He has drooping yellow eyes, and wears a gray chiton with brown sandals. Standing at around 6'11" (212 cm[1]), he wields a large metal mallet which matches the metal pieces that wrap around his left wrist and right ankle.

Described as creative and cunning, Dyntos is an eccentric man who devotes himself entirely to his work. While he is implied to be one of the most powerful gods in the pantheon, he cares little about the affairs of the world and remains uninvolved in the conflicts of others.

He seems to be somewhat stubborn, as he demands respect from those who are below him and refuses to aid people unless they can prove their worth to him. However, he is also shown to be mischievous and likes to mess with those he tests, though this doesn't appear to be ill-natured on his part.

With the Three Sacred Treasures destroyed by Hades, Pit is sent to meet Dyntos to ask for his help. During the course of the chapter, Pit fights various enemies of the Underworld, Forces of Nature, and even Aurum, all of which were created by Dyntos to be superior replicas of the originals.

When Pit arrives in his chamber, Dyntos sends the angel to face the Three Trials, the first consisting of fighting recreations of the Phoenix, the Kraken, and Cragalanche. In the second, Dyntos summons Magnus and Gaol to fight Pit simultaneously, then tries to psych him out by bringing in Pseudo-Palutena, a deluded zombie-like clone of the Light Goddess. For the final trial, Pit fights the Great Sacred Treasure itself. Upon defeating it, Pit is granted use of this powerful new weapon to defeat Hades.

The god and keeper of the forge. He is the creator of not only the Three Sacred Treasures but all sacred armaments. Cunning and highly creative, Dyntos is said to be one of the few real forces in the divine pantheon. 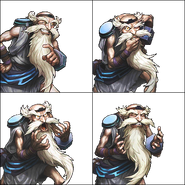 Retrieved from "https://kidicarus.fandom.com/wiki/Dyntos?oldid=48619"
Community content is available under CC-BY-SA unless otherwise noted.