The Eggplant Wizard (ナスビ使い Nasubi Tsukai, "Eggplant Bearer") is an Underworld enemy that debuted in the original Kid Icarus.

In the original Kid Icarus and Of Myths and Monsters, the Eggplant Wizard is a purple-skinned monster with large, pink lips and a single green eye. It wears a long, blue robe with a pink and blue cape, and wields a golden staff with an eggplant charm attached to it.

In Uprising, its eye is now magenta, which matches its sash-like cape. Its robe is accompanied by brown and green accessories, and its staff now appears to be made of wood.

Being located in every Fortress, Eggplant Wizards usually appear in pairs. They throw arched projectiles at Pit which inflict the eggplant curse, a status ailment that transforms Pit into an eggplant with legs. This condition disables all forms of attack for the angel, forcing him to seek out a Hospital to rid him of the curse.

Eggplant Wizards behave similarly to how they did in the original Kid Icarus, only now their curse enables Pit to run underneath enclosures that he normally could not access.

The Eggplant Wizard's strategy is the same as it previously was—to inflict the eggplant curse on its opponents to leave them vulnerable. However, it now has different methods for inflicting this curse: at a distance, it will throw two projectiles toward Pit, and at close-range, it will throw two eggplants directly over him. In addition, it teleports closer if the angel is outside of its attack range, and may also occasionally teleport while Pit is within its range; if this occurs, it will leave behind a single eggplant in its place, which will transform Pit if he is caught up in the blast.

Unlike the original Kid Icarus, Pit receives an insignificant amount of damage if hit with one of its projectiles, and its curse is now only temporary, as Palutena will cure the curse herself after a short period of time.

The Eggplant Wizard appears in Captain N: The Game Master, voiced by Michael Donovan. Eggplant Wizard is one of Mother Brain's lieutenants, alongside King Hippo. He spouts fruits and vegetables when agitated or hurt, and often uses them for outlandish purposes.

Those hit by eggplants thrown by the Eggplant Wizard are turned into, well, eggplants. Pit can't attack in this state, and the only cure is time. So you'd best vamoose if you don't want to end up baba ghanoush. 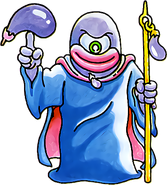 The Eggplant Wizard as it appears in the original Kid Icarus. 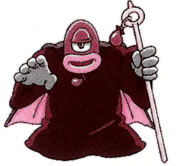 The Eggplant Wizard as it appears in Of Myths and Monsters. 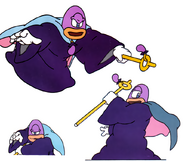 Artwork of the Eggplant Wizard from an issue of Nintendo Power. 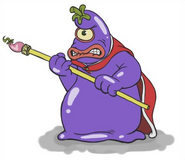 The Eggplant Wizard as it appears in Captain N: The Game Master.

AR Card of the Eggplant Wizard. 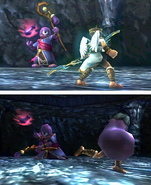 Retrieved from "https://kidicarus.fandom.com/wiki/Eggplant_Wizard?oldid=48598"
Community content is available under CC-BY-SA unless otherwise noted.