The End-All Arm is a bulky, gauntlet-like weapon with green markings. It possesses several spiky protrusions, with a purple cluster of spikes located near the top.

While in the process of attacking, the End-All Arm opens up from the split down its middle, resembling a gaping maw.

The End-All Arm is a weapon the player can use in-game, which can be obtained as loot, through fusion, or by completing a challenge in Hades's Treasure Hunt that requires the player to recover onto their feet from knockback 100 times.

The End-All Arm is the be-all arm for malicious decimation. Though it takes a long time to charge, its continuous fire is deadly, particularly when fired during a side dash. However, it does slow the user's movement somewhat.

AR Card of the End-All Arm. 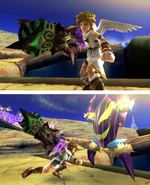 Retrieved from "https://kidicarus.fandom.com/wiki/End-All_Arm?oldid=48963"
Community content is available under CC-BY-SA unless otherwise noted.