Erinus is a cloaked, one-eyed monster encountered in the Palace in the Sky and attacks all who enter. Erinus will continue to attack Pit even after being blasted apart by his Bow's Arrow of Light by having the remaining parts dash at the angel. He's tenacious enough to keep re-appearing until shot to pieces.

Erinus is a mysterious creature, as the cloak obscures most physical traits other than a monocular eye, fangs, and claws.

It will not forgive those who have entered the Palace in the Sky. It is said that no one has seen it and lived to tell the tale." 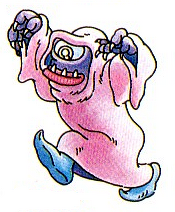 In this game, Erinus splits in two after taking a certain amount of damage. Then, Pit must battle its cloaked upper half, which charges at Pit while twirling around, alongside its legs that are wearing boxers, which try to kick Pit. Humorously, it is revealed that the Erinus' lower half wears blue-striped boxer shorts underneath its robes when it splits apart.

An Erinus is an Underworld foe that prefers to attack in great numbers, though even when seeming to fight solo...it isn't. It's top and bottom halves can separate and fight independently, making it a diabolical duo!