The Fiend's Cauldron is a system that lets the player choose the difficulty of a stage by offering a certain amount of hearts. It appears at the start of every stage in Kid Icarus: Uprising's Solo Mode.

The higher the Intensity, the more monsters there are and the harder the stage is to clear. However, the higher intensity the player sets it to, the better chance the player has of getting more hearts and better weapons.

The lowest Intensity on the Fiend's Cauldron is 0.0 and the highest is 9.0. 2.0. is the standard difficulty and does not cost any hearts. Lowering or increasing the difficulty requires the player to spend more hearts. Retreating will make the player lose those hearts.

Dropping hearts into this pot raises the Intensity, making enemies stronger but also causing valuable weapons and items to appear. If you fail the level, you'll lose hearts, though you can choose to continue at a lower Intensity. 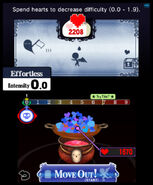 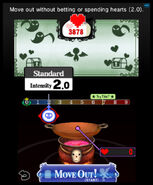 Intensity at 6.0
Add a photo to this gallery

Retrieved from "https://kidicarus.fandom.com/wiki/Fiend%27s_Cauldron?oldid=47316"
Community content is available under CC-BY-SA unless otherwise noted.