The Fire Serpent is the last of the three fortress guardians in Kid Icarus: Of Myths and Monsters.

As its name implies, the Fire Serpent is a massive snake monster that is supposedly made of fire, though its flames are not depicted.

Having been entrusted one of the Three Sacred Treasures by Palutena, the Fire Serpent appears as the third boss of the game.

Its main strategy is to ram into its opponent when slithering throughout its chamber, as well as launching three fireballs at its foe which spread over a distance. Its head is the only vulnerable part of its body. 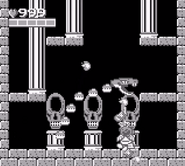