Start a Wiki
The First Blade (最初の撃剣 Saisho no Gekiken, literally meaning "First Fencing") is the first weapon Pit receives in Kid Icarus: Uprising. Palutena gives it to him as a starting weapon for the game to fight the Underworld Army. When the player receives the First Blade at the beginning of the game, it has a strength value of 100, the basic value of a weapon and has no modifiers. The First Blade is probably the most balanced weapon in the game, being able to handle all situations and therefore is an excellent beginner's weapon. Pit can change the weapon between chapters as long as he has a different weapon (i.e. Twinbellows Cannon).

Entrusted to Pit, this blade is just one of a new breed of armaments that combine close-quarters combat with ranged proficiency. The First Blade is well balanced in usability and strength, making it the perfect beginner's weapon.

Standing Continuous: 2.3 per round

Note: All data are from the basic weapon valued of 100.

Main Article: Fuse Weapons
In Kid Icarus: Uprising, it is possible to fuse two weapons into a new one. The stronger the weapons you use are, the stronger the result will be. Certain weapon modifiers from the old weapons have a chance of being transported to the new one. There are many pairs of weapons that can be fused into a First Blade. The First Blade can also be fused into many other weapons. Here are just a few examples.

Pit shooting a Monoeye with a First Blade

Pit flying with a First Blade

Pit(poisoned) with a First Blade 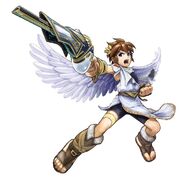 The First Blade in "Return of Palutena"

Retrieved from "https://kidicarus.fandom.com/wiki/First_Blade?oldid=50379"
Community content is available under CC-BY-SA unless otherwise noted.