Ganewmedes are said to be a different form of Monoeye or perhaps even the living skeletal remains of them. They retain their massive single eye but seemingly evolve a functional jawbone that, in some cases, can produce spiked projectiles as an attack. Ganewmedes are capable of flight without the need for wings and are able to maneuver themselves through the air using their feelers (or, in the case of Kid Icarus: Uprising, claws). However, the Cyclops Skull variation lacks feelers altogether, despite them still being able to fly.

"Evolved from a Monoeye. It's a floating life form that builds its nest in fortresses. It stands guard over the fortress with its enormous eye. Watch out for its feelers. They are weapons." 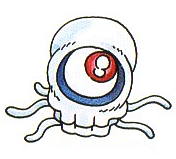 Here, they appear in packs of eight, only in the Underworld Fortress, and use swarming attack patterns.

"Appear in the air above Pit, flying around in groups."

It's known as the Cyclops Skull here, and uses swooping tactics. It's not found in the Fortress.

Ganewmedes return as enemies in the game. They prefer to float in the air and attack Pit by spitting out spiked balls that can follow him. They are notably stronger than in the previous games, and now have claws instead of tentacles to move around with.

Ganewmedes are evolved Monoeyes whose tentacles have been replaced by spiky legs. They respond violently when fired upon, so approach them calmly and use melee attacks to take them out without getting hurt.

Retrieved from "https://kidicarus.fandom.com/wiki/Ganewmede?oldid=46991"
Community content is available under CC-BY-SA unless otherwise noted.