Girins (ギリン Girin) are Underworld enemies that debuted in the original Kid Icarus.

In the original Kid Icarus, the Girin is a large, pink insect with green mandibles and eyes, and a yellow underside.

In Uprising, the Girin is now teal in color, with matching mandibles and red eyes. In addition, its bulbous abdomen is yellow, and it possesses orange and purple accents across its body.

Found in the Overworld, Girins launch projectiles at Pit before quickly retreating underground.

Despite its description in the game manual, it does not possess the ability to capture Pit.

Similar to the original Kid Icarus, the Girin lies in wait underground, with only the tips of its mandibles poking through the surface. However, it no longer fires projectiles, resorting to slamming into the ground and emitting shockwaves instead.

Should its prey be close enough, it will lunge out and strike using its large mandibles.

Rather than waiting for prey to fall into its trap, this hyperevolved ant lion jumps out at enemies, attempting to crush them in its pincers. However, Girin leaves itself open to attack after this lunge and will retreat in surprise if hit. 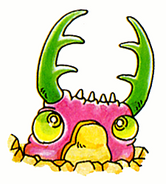 The Girin as it appears in the original Kid Icarus.

AR Card of the Girin. 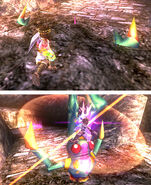