Made out of pure orichalcum, the Great Sacred Treasure is capable of changing form and adapting when damaged, enabling it to be used continuously regardless of the situation.

Its Full Form (完全フォーム Kanzen Fōmu, "Full Form") is the first form used. In this form, it is capable of shooting flurries of arrows from the cannon located on its chest, as well as a powerful explosive charged shot from the rifle on its right arm.

When battled in Chapter 24, it displays attacks such as small whirlwinds, the aforementioned arrows, energy shots, fireballs, and a dash tackle. Its most powerful attack is a large laser beam that can instantly destroy anything within its radius.

Pursuit Mode (高速フォーム Kōsoku Fōmu, "High-speed Form") is the second form used. In this form, the Great Sacred Treasure shifts into a slimmer appearance, equipped with a Gatling turret capable of firing powerful lasers, as well as rapid fire bullets.

Mech Armor Mode (格闘フォーム Kakutō Fōmu, "Fighting Form") is the third form used. In this form, the Great Sacred Treasure shifts into a more humanoid appearance, gaining arms and legs. It fires projectiles from the five points on its golden insignia.

After Hades detaches the top half of the Great Sacred Treasure from the bottom half, the Mech Armor form gains a new weapon in the form of a long, blue energy blade, which Pit then uses to slice Hades in half.

Ultralight Mode (飛翔フォーム Hishō Fōmu, "Flying Form") is the fourth form used. Appearing as half of the previous form but with golden wings, this form is incredibly nimble. It can rapidly shoot green energy beams from its palms, as well as launch powerful waves.

The Final Strike (最後の一撃 Saigonoichigeki, "Final Straw") is all that remains of the Great Sacred Treasure after it is destroyed by Hades, with its only usable component being a single cannon. Fueled by Palutena's divine power, it fires a large laser powerful enough to destroy Hades's physical form.

After the Three Sacred Treasures have been destroyed, Pit and Palutena seek out Dyntos to create a new weapon for them. However, Dyntos is reluctant to help, forcing Pit to participate in three trials to prove himself worthy first.

The Great Sacred Treasure enables Pit to keep up with Hades for their final battle together, switching forms and adapting to everything that Hades throws at the angel.

However, Hades destroys the treasure in a single clap, sending Pit plummeting to the Overworld. Viridi then grants Pit the Power of Flight while Palutena charges the remaining cannon of the Great Sacred Treasure, which they use to defeat Hades once and for all.

Despite being quite the sizeable mech, the Great Sacred Treasure is as nimble as it is powerful. It is capable of shooting a wide range of projectiles, summoning whirlwinds, charging full speed at its foe, inflicting a multitude of Status Ailments, and dodging predictable attacks by rolling or teleporting away.

Upon taking enough damage, the Great Sacred Treasure's strategy will change. Not only will it use its former moves, but it will also charge a massive beam that destroys half of the battlefield and instantly kills anything caught in the blast. In addition, it can also summon an orb that will gravitate its opponent toward the center of the stage, as well as fire huge laser beams.

The Great Sacred Treasure was designed by Dyntos to be the ultimate weapon. Used in the final battle against Hades, the weapon is huge and incredibly powerful, yet can stop on a dime and change its form to adapt to damage.

As Hades rushes to the surface world to refuel on souls, the Great Sacred Treasure jettisons its heaviest parts and enters the high-speed Pursuit Mode. Equipped with a gatling turret, its guns can fire both bullets and ring lasers.

Shedding even more parts from Pursuit Mode, the Great Sacred Treasure takes a humanoid form. This versatile mode doesn't require any specialized controls; it actually moves as if it were an extension of the user's own body!

The Great Sacred Treasure abandons all but its most necessary parts to enter this super-mobile mode. While it can keep up with Hades, the god of the Underworld destroys it with a single clap, leaving only its cannon behind.

When the Great Sacred Treasure is destroyed by Hades, the main cannon loses power, requiring Palutena to concentrate on using her divine power to restore its energy. Luckily, Viridi steps in to keep Pit flying! 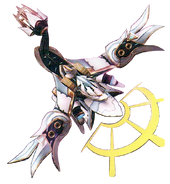 AR Card of the Final Strike.

The Great Sacred Treasure, engaging Pit in battle in Chapter 24.