Appearing as red shields with gold accents, the Guardian Orbitars are a pair of weapons that float to either side of the user.

While the Guardian Orbitars' charged shots exclusively act as attacks in Solo Mode, they possess the additional ability to block enemy fire in Together Mode.

The Guardian Orbitars are weapons the player can use in-game, which can be obtained as loot, through fusion, or by completing a challenge in Viridi's Treasure Hunt that requires the player to narrowly avoid a total of 25 shots in Air Battles.

Appearing as both Pit and Dark Pit's Down Specials, the Guardian Orbitars act as shields that reflect incoming projectiles and block attacks.

These orbitars specialize in defense, for their charged shot raises a shield that has a strong potential of nullifying incoming fire. After throwing up this shield, users should switch to continuous fire as their main method of attack.

Guardian Orbitars are more defensive in nature than other Orbitars. When you fire a charged shot, they will create a shield that protects you and your friends. It's a good thing these float in the air on their own—they're actually ridiculously heavy.

Artwork of the Guardian Orbitars.

AR Card of the Guardian Orbitars. 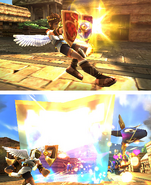 Retrieved from "https://kidicarus.fandom.com/wiki/Guardian_Orbitars?oldid=50384"
Community content is available under CC-BY-SA unless otherwise noted.