Hades (冥府神ハデス Meifu-shin Hadesu, "Netherworld God Hades") is the antagonist that debuted in Kid Icarus: Uprising. A chaotic individual who takes pleasure in the suffering of others, he is revealed to be the true primary antagonist of the game and the true Lord of the Underworld.

He is voiced by S. Scott Bullock in the English version of Uprising, and by Hōchū Ōtsuka in the Japanese version of the game.

Hades appears as a muscular humanoid demon-like deity with purple skin and red tattoos. He has long red, green, and pink-colored hair. He wears very grotesquely designed robes and clothing with asymmetrical shapes and a cape seemingly made out of darkness and fire. He has red lines that run up both his arms and legs. The inside of his body is completely chaotic in design, with even skies, grind rails and surreal structures found commonly throughout.

After he is decapitated by Medusa, Hades regenerates a second head composed of blue flames similar to those of Pandora. His eyes in this form are colored orange.

At first glance, Hades is shown to be a mischievous, manipulative trickster. When engaging in conversation, his tone is playfully dull, yet brimming with sarcasm and cruelty. He has a sense of showmanship, using a combination of witty remarks and belittling insults when talking to and about others. He also has a bit of a flirtatious side, constantly making unwanted passes and flattering remarks to and about all the female characters. Hades is considerably arrogant, brushing off any matter as not important.

However, his nonchalant demeanor belies his true dark and destructive personality. At his core, Hades is merciless with an utter disregard for life. His lust for killing makes him seem completely unconcerned when his commanders fall in battle, stating that his army is too stupid to have an actual ranking, and has no problem killing off Medusa when she interferes during Hades's final battle against Pit. He also sees souls as nothing more than either materials to create his monsters or nourishment to make himself more powerful, indifferent to the fact that his action is upsetting the natural balance of the world due to his selfish greed and hunger. Hades is also not a completely loyal team player, as displayed when despite setting aside his hostility to combat the Aurum, he sent out Mimicuties to hinder Pit's progress.

Despite all his malicious tendencies, he does have a genuine sense of humor and enjoys telling jokes and making puns at even the most odd or inappropriate of times. He also shows genuine respect for Pit as a worthy adversary, holding no grudge against Pit after the latter killed him and destroyed his body, and even complimented his abilities, albeit still throwing a few nasty remarks in his direction.

Hades is shown to be one of the most powerful characters in the game, alongside Lord Dyntos. Hades is also powerful enough to destroy the Three Sacred Treasures in one blast. Hades has the ability to manipulate souls, and can revive fallen allies or create new monsters using this ability. He can also devour souls to increase his strength and use souls to regenerate lost limbs. However, the latter ability makes Hades more vulnerable to damage.

However, Hades's ability to manipulate souls serves as a double-edged sword. By stealing and devouring souls, Hades erases them from existence, keeping them in limbo. This action progressively disrupts the natural balance of the world.

In battle, Hades is a fearsome opponent, showing great skill in both magic and hand-to-hand combat. In the final battle, Hades dons his "Devastation Ensemble" which he only wears for very special occasions, such as weddings or armageddons. In this state, his entire body is covered in missiles and laser turrets with his face. This turns his body into a literal weapon of mass destruction. Hades can also fire lasers from his hands and face. Hades can spin at speeds fast enough to create twisters, and can teleport at speeds that can only be matched by the Great Sacred Treasure's Pursuit Mode. Like the other gods, Hades can communicate via telepathy and project his astral form.

During the events of Uprising, Hades revives Medusa and her forces to serve as distractions to keep Palutena and Pit on their toes. After Medusa's defeat, Hades reveals himself by ripping off the credits and saying that he is the one who revived Medusa as well as telling Palutena that the real fun is about begin. Hades first begins his campaign by manipulating Pit into killing off the Phoenix while making him think he is after the Wish Seed. However, revealing that he knew the Wish Seed was a fake, Hades reveals the Wish Seed's existence to the people so that they can kill themselves over a wish-granting item that does not even exist. The subsequent attacks of Viridi, the Aurum, and the Chaos Kin ultimately force Pit and Palutena to ignore Hades in favor of stopping the more immediate threats while he makes a constant presence both through his army as well as with snide jokes and nonchalant insults.

During the Aurum invasion in Chapter 15, he sends Mimicuties to toy with Pit. However, he does aid Pit during the attack on the Aurum Hive by having his minions commandeer one of their battleships and ram it into the Hive. Hades's reasons for fighting against the Aurum were purely due to his selfishness, as he considered the Earth to be his to plunder and his alone. In Chapter 17, his army attacks the Aurum Brain alongside Viridi's forces, Pyrrhon, Pit, and Palutena's Army.

After Pit is turned into a ring, Hades's forces continue harassing humankind, though Palutena, her army, and Pit's Body become the enemies of humankind as well, under the control of the Chaos Kin. Hades takes advantage of the situation and collects the souls of humans killed during the three years Pit spent as a ring. Upon Pit's return, his forces continued to harass Pit (who is aided by Viridi), humanity, and Palutena's forces (which are under the control of the Chaos Kin). He tries to steal the Lightning Chariot both for himself and to stop Pit and Viridi from obtaining it. During Chapter 20, his forces assault Pit on his way to Palutena's Temple in the Lightning Chariot. After Pit destroys the barrier surrounding the temple, Hades takes the opportunity to attack it and Pit, all the while mockingly suggesting that Pit should kill Palutena instead of the Chaos Kin, but Pit ignores him.

In Chapter 22, both Hades and his forces assault Dark Pit on his way to the Rewind Spring and mentions how he would love to get his hands on Dark Pit's soul. Eventually, everyone learns Hades's goal of using the souls of everyone who died in the series of wars to create his army and increase his own power, an act that is interfering with the natural order and is threatening to all. Dark Pit manages to elude him and makes it to the Spring but is attacked by the revived Pandora. When Hades arrives at the Spring, he is greeted by Amazon Pandora, and is shocked to find out it is Pandora herself. Realizing the Spring's power, he plans to destroy it to prevent it from being used on Pit, but fails as Pandora is defeated once again.

Though Pit initially takes up the Three Sacred Treasures to mount an attack on Hades, the god proves too powerful as he destroys the weapons with a single attack and swallows up Pit. Hades proceeds to fight off Viridi's army before sensing that Pit is damaging his heart. Just then, Dark Pit uses the Lightning Chariot to pierce through Hades's chest, rescuing Pit. Hades quickly tries to grab them, but they vanish due to Palutena's intervention.

Later, Hades confronts Pit again when the latter is given the Great Sacred Treasure. Though it seems that Pit has the upper hand in the extended battle, Hades ends up turning the tables and destroying the suit. However, a recently revived Medusa comes to Pit's aid at the last second, making Hades retaliate and kill Medusa with a single punch. The delay gives Palutena an idea to charge up the remaining cannon of the Great Sacred Treasure, which Pit fires on Hades, ultimately defeating him.

Five minutes after the ending credits, Hades's disembodied voice states to the player that he might find a way to resurrect himself for the next game in 25 years. To make sure the player won't think of him as a sore loser, he also gives them the Boss Battle mode.

Hades appears as a collectable spirit in the game's aptly named Spirits mode, where he transforms into his battle form upon reaching level 99.

The true master of the Underworld. He is immeasurably strong—even among the divine pantheon—but prefers to rule from the shadows, forcing Medusa to do his dirty work. Yet even with all this evil, Hades still manages to act nonchalant.

Hades, prepared for the final battle. Covered with missiles, his body is quite literally a weapon of mass destruction. Only Hades's selfish protection of the Underworld's bottom line keeps him from going all out on Pit.

After being cut in half by the Great Sacred Treasure, Hades heads to the surface world to regenerate his legs. Because this trick uses an immense number of souls, the usually invincible Hades suffers damage in the process.

Mere moments after having his head crushed by Medusa, Hades returns with a new, fresh complexion. While he attacks Pit with a renewed ferocity, it still isn't enough to withstand the assault of the Great Sacred Treasure.

Hades, Lord of the Underworld

The true ruler of the Underworld, he is so powerful that he easily resurrected Medusa for his own amusement—and to distract his foes. Full of arrogance, he does have a genuine sense of humor, though it mainly serves to conceal his callous disregard for life. 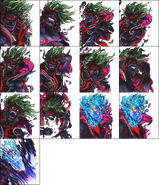 Promotional artwork of Hades and Pit.

Hades, after ripping through the credits in Chapter 9.

Retrieved from "https://kidicarus.fandom.com/wiki/Hades?oldid=50958"
Community content is available under CC-BY-SA unless otherwise noted.