Possessing three separate personalities for each head, Hewdraw serves as a commander to the Underworld Army and as the boss of Chapter 3.

All three heads are voiced by Danny Mann in the English version of Kid Icarus: Uprising, and by Masaya Takatsuka in the Japanese version of the game.

In the original Kid Icarus, Hewdraw appears as a singular serpent with pink scales and a yellow underbelly. It has green fins on either side of its head, and green eyes to match.

In Uprising, Hewdraw appears as a large, serpent-like dragon with purple scales and a white underbelly. It now has three heads, each one a different shade of violet: the right head is violet-blue, the left one is red-violet, and the middle one is simply violet. The heads all have amber eyes, and horns on their noses and foreheads. It also has fins on the sides of its heads, as well as on the sides of its body, and on the tip of its tail.

The blue head of Hewdraw is seemingly the most approachable of the three, greeting Pit with a cheerful "hello" on multiple occasions. Despite this, he still very much wants to eat the angel and initially attempts to lure Pit into coming within his reach. The blue head also appears to be the calmest of the three, although he doesn't seem to care much for his brothers, considering them as nothing more than "deadweight." He shows a certain vanity in his last moments, claiming he is too pretty to die before passing.

His voice is noticeably deeper compared to the other two heads.

The violet head of Hewdraw appears to be the most intelligent of the three, displaying a great sense of superiority over his brothers. However, this attitude puts him at odds with his fellow heads and tends to ignite arguments between them as a result. Despite this, he is still capable of showing others respect where it is due, as he compliments Pit and tells him that he is proud of the angel during his last moments.

His voice is higher pitched compared to the other two heads.

The red head of Hewdraw seems to be the most impulsive and irritable of the three, focusing more on his hunger than the situation at hand. While he can get annoyed rather easily, this head does display more maturity than the other heads, as shown when he tries to convince the others not to argue when they have company. Aside from these rare cases of decency, the red head tends to yell and whine most of the time.

His voice is raspier compared to the other two heads.

Hewdraw is the Gatekeeper for the Overworld's fortress, guarding one of the three Sacred Caskets. The combat area consists of platforms over a lake of lava, and Hewdraw's tactics consists of diving in and out of the lava, hoping to catch Pit in its jaws. It has no projectiles of its own, so as long as Pit can avoid physical contact, Hewdraw will fall easily. This fight is made easier with Centurions, since their arrows will stretch across the entire area. Pit must be careful when positioning the Centurions, however, as a lunge from Hewdraw could easily knock out all three in one fell swoop.

Chapter 3: Heads of the Hewdraw

Sent by Medusa to attack Skyworld in retaliation for the defeat of Dark Lord Gaol, Hewdraw is soon after destroyed by Pit, but not before two of its heads become separated from its body. However, able to live without their body, the two Hewdraw heads proceed to run amok in That Burning Town. While one head is lured into a courtyard and promptly defeated by Pit, the other takes shelter by a lake and forms a new body, laying in wait for the angel to reach it. Pit eventually confronts the now single-headed Hewdraw and defeats it once and for all.

A fake version of Hewdraw appears as one of the bosses of the chapter, created by Medusa.

Hewdraw appears as a collectable spirit in the game's aptly named Spirits mode.

Hewdraw appears in the episode Mr. & Mrs Mother Brain where it appears to be a rabbit-like snake. Curiously, it also has a shell on its back and is capable of flight despite possessing no wings.

An enormous three-headed flying dragon. Each of Hewdraw's heads has its own personality, causing them to constantly bicker and argue. Lucky for them, the heads can survive if ever separated from their body.

After being severed from their shared body, Hewdraw's heads are free to go their own ways. One is dumber than the others, and Palutena is able to lure it with her pheromones, giving Pit a chance to slay it once and for all.

Hewdraw's incredible regenerative ability allows its final head to regrow a new torso mere minutes after its decapitation. After resting by a lake to regain its strength, the beast later waits to take its revenge on Pit.

A dragon with three regenerating heads. Each head has its own unique personality, and they are not known for getting along. One head would want to destroy a wall, the second would go around it, and the third would fly over it. All three are plenty happy to devour a meddling angel, though.

Hewdraw as it appears in the original Kid Icarus. 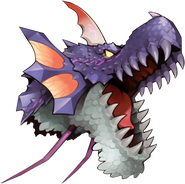 Artwork of the Hewdraw Head in Kid Icarus: Uprising.

AR Card of the Hewdraw Head.

Pit running on the back of Three-Headed Hewdraw.

Pit encountering Hewdraw Reborn.
Add a photo to this gallery

Retrieved from "https://kidicarus.fandom.com/wiki/Hewdraw?oldid=49518"
Community content is available under CC-BY-SA unless otherwise noted.