The Hugworm is a large, green and yellow worm made of corn—its rotating beak resembles an ear of corn, while its slender body appears to be covered in corn husks. In addition, it has multiple brown ridges with corn protruding from its back and tail, and brown eye stalks with yellow eyes.

At close range, it will swipe its upper half around in an attempt to grab its prey. Should this attack connect, it will coil around its foe, constricting them before releasing them.

From afar, it will burrow through the ground to close the gap and use the former attack. However, it may also also ram into its opponents using its spiky beak, which the Hugworm always precedes by briefly shaking its body.

These worms use their beaks to burrow through the ground and suddenly appear. They coil around their prey until it loses consciousness and then gobble it up with delight. Hugworms fear being cooked, so your best strategy is fire and lots of it.

AR Card of the Hugworm. 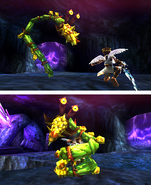