Divinipedia
Register
Don't have an account?
Sign In
Advertisement
in: Kid Icarus, Kid Icarus enemies, Kid Icarus: Of Myths and Monsters,
and 5 more

Komaytos are Underworld enemies that debuted in the original Kid Icarus.

In the original Kid Icarus and in Uprising, Komaytos are light blue, gelatinous creatures with three pink-red spheres in the center. They have vein-like fibers connecting from the spheres to the surface of their skin, and two sets of mandibles located near the bottom.

Due to these features, Komaytos bear a striking resemblance to the Metroid from the Metroid series.

In Of Myths and Monsters, their appearance was altered to stray away from their previous form, appearing more blob-like and possessing only a single protrusion from their bodies.

Komaytos move in the exact same fashion as Monoeyes, where they attack Pit by ramming into him in groups of four. They can be found in the Skyworld stage.

Appearing in the Skyworld Tower, they behave similarly to how they did in the original Kid Icarus.

Komaytos behave differently from how they previously did, now gently floating towards their opponents and latching onto them to drain their life energy. Though they are invulnerable to ranged attacks, they can still be defeated with melee attacks.

While this creature resembles a certain alien life-form, the last Komaytos are not in captivity and Skyworld is not at peace. Stray too close and it will latch on to you, draining your life energy and restricting your movement. 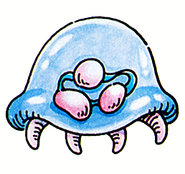 The Komayto as it appears in the original Kid Icarus.

The Komayto as it appears in Of Myths and Monsters.

AR Card of the Komayto.