The Lurchthorn is a skeletal, fish-like monster made up of several triangular segments. Its brown skeleton is concealed by gray armor, which rotates while attacking.

Following a set path, Lurchthorns will use the segmented guns on its body to fire projectiles at its opponents. These guns can be destroyed individually, causing it to lose the ability to attack—however, the only way to defeat the Lurchthorn is by targeting its head.

Lurchthorns appear as enemies in the multiplayer feature Smash Run, granting the player power-ups upon defeat. In addition, it appears as a stage hazard in the Reset Bomb Forest stage.

Is it a bird? Is it a plane? No, it's...some kind of giant fossilized fish. Lurchthorns fly around, shooting at anyone who strays too close. Each of its segments attacks separately, so the more it has, the more dangerous it is. To get rid of it quickly, take out the head—that'll kill off the entire Lurchthorn in one go!

This string of cannons lies in wait until an enemy draws near, at which point it activates and speeds through the air. The turrets located on its joints can be destroyed, but targeting its head is the most effective strategy.

AR Card of the Lurchthorn. 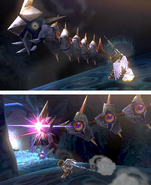