She is voiced by Cree Summer in the English version of Uprising, and by Naomi Shindō in the Japanese version of the game.

In the original Kid Icarus, she appears as a large, green cyclops wearing a simplistic pink dress. She has curly yellow hair with four snakes protruding from it, fangs sticking out of her mouth, and clawed hands and feet.

In Uprising, Medusa appears as a humanoid woman with purple-gray skin, lavender eyes, scaly arms, and a black tattoo over her left eye. Her long, black hair has several teal snakes mixed in, with a single orange snake on the left side of her head. She wears a long, dark purple dress that blends into red at the bottom, with gold trimmings throughout and gold ornaments that match Palutena's dress. She wields a two-pronged gold and blue staff with two snakes wrapped around it.

While Palutena is shown to be warm and kind, Medusa serves as a stark contrast to the Goddess of Light, being much more cold and sinister. She delights in the suffering of her enemies and shows little regard for the lives of others.

Although she despises humanity, this contempt is only rivaled by her hatred for Palutena and Pit. She thirsts for revenge against anyone she perceives to have wronged her, and will stop at nothing to achieve her goals.

Prior to the events of the original Kid Icarus, Medusa and Palutena ruled Angel Land together in peace. While Palutena fostered the growth of humanity, Medusa hated their kind, causing her to dry their crops and petrify people. In a fit of anger, Palutena changed Medusa into a hideous cyclops and banished her to the Underworld. Since then, Medusa vowed to overthrow Palutena and retake her position in the Palace in the Sky.

Gathering the Underworld Army under her command, Medusa led a surprise attack upon Palutena's army and took possession of the Three Sacred Treasures, giving each to her most powerful followers while imprisoning Palutena within her own palace. However, Palutena sought the assistance of Pit, a young warrior who used to be in charge of Palutena's personal body-guard who was locked in a dungeon in the Underworld at this time. Palutena used her magical prowess to arm Pit with a bow and arrow to assist him in his escape from the Underworld, enabling him to regain the Three Sacred Treasures and use them to end Medusa's reign of terror.

Though unaware of this, Medusa was resurrected by Hades when he added "a pinch of her memories to a ton of souls," thus creating her new body. Regardless, Medusa reassembles the Underworld Army to attack the world and get her revenge on Pit and Palutena for her defeat twenty-five years prior. When her forces are defeated and Pit storms her domain, Medusa battles the angel and is defeated by him again after being forced to assume her true form. A false ending then rolls, which is interrupted by Hades, explaining that the entire attack was actually his doing and that he resurrected Medusa to keep Pit and Palutena busy while he put his plans into motion.

During Pit's final battle with Hades, a revived Medusa appears to help Pit by attacking Hades, saving Pit before Hades can unleash his "deadliest attack" and destroying her arm in the process. When Palutena questions why she would help them, Medusa states that she will not play Hades's puppet anymore and attempts another attack. This time, Hades blocks her and destroys her remaining arm before promptly finishing her off for good.

Medusa is the main character of the single-episode anime short Medusa's Revenge, which covers her past as a Goddess of Skyworld, up to the beginning of Uprising.

Medusa appears as a collectable spirit in the game's aptly named Spirits mode.

Medusa made an appearance in the episode Mega Trouble for Megaland, where she was guarding the Three Sacred Treasures on Mount Icarus. Her design is a mix between her human and monster forms, and she has a beautiful voice to trick her victims into a false sense of safety. This ability worked on the easily fooled Simon Belmont, although Medusa was ultimately defeated by accidentally looking into the Mirror Shield and turning herself into stone.

There are four phases to the fight with Medusa in Uprising, all of which take place as an air battle. In the first phase, she will start by blasting Pit away so he can't hit her; at the beginning and when closing in on her, the player can briefly hit her with long-range weapons. As Pit approaches, she will attack by spawning two types of projectiles—rotating, homing green orbs and non-homing black eyeballs. Once these dissipate, she will summon a pattern of rotating lasers (either a pentagon or a square, with the lasers for each side continuing in a different direction), then attack with rubble that can be broken; she will then repeat this process.

The second phase occurs once Pit begins to close in. First, she will spawn two floating mines which cannot be destroyed. As Pit gets closer, she will spawn a small, homing eye and then teleport away. To avoid hitting the mines, the safest response is to shoot down the eye. After doing this four times, she will finally stay still enough for Pit to shoot her. She will fire gray projectiles that cause shaking and occasionally teleport to claw at Pit (which is telegraphed by bright red lines appearing on one side of the screen).

After dealing enough damage, Palutena will bind Medusa's legs in place, preventing her from teleporting. She will now fire a different type of eye beam, which does not cause Shaking. Occasionally, she will raise her right hand, which has a mouth that spews a poison-inducing mist.

Once Pit damages her further, Medusa will transform into a more monstrous form and detach her head to get around the teleport ban. She will chase you around the arena, attacking in two ways—slow-moving poisonous skulls, similar to the ones Thanatos fires in his standard form, and lasers (which also spawn three homing projectiles that can be shot down). Finally, dealing enough damage will cause Medusa's head to reunite with her body. She will clutch her face in pain and raise it back up to reveal her single eye glowing brightly. Shooting this eye will defeat her.

The one-time Queen of the Underworld, exiled by Palutena long ago. Twenty-five years ago, Pit defeated her once and for all...or so it seemed. Now resurrected and thirsty for revenge, Medusa leads an army far more powerful than before.

The only comfort throughout Medusa's quarter century in exile was the thought of bloody retribution against Pit and Palutena. Now, facing the angel after all these years, Medusa's wrath is only matched by her fervor for revenge.

Long ago, Palutena cursed Medusa with this hideous form. Unable to face the monstrosity she had become, Medusa used her magic to maintain a mask of beauty—a facade that falls when she's forced to put all her strength into defeating Pit.

Hades reconstructed Medusa from countless souls woven around a core of pure hatred for Palutena. Oblivious to the true cause of her resurrection, Medusa sets out to take revenge and conquer the three worlds completely.

Medusa is the goddess of darkness and the leader of the Underworld Army. Although she was defeated in the past, Hades has secretly resurrected her to fight again. Those slithering snakes on her head are really unpleasant. That's got to be the worst hair day ever. 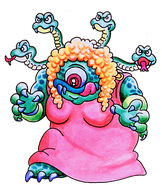 Medusa as she appears in the original Kid Icarus.

Medusa's appearance in an early trailer for Kid Icarus: Uprising.

Medusa as she appears in Uprising.