Resembling a pill bug, the Megonta is a massive crustacean with a purple, spotted shell, and a hole in its back from which it launches projectiles. It has a tan underside with six limbs and two yellow eyes.

Close range, the Megonta will hide its weakpoint by curling up into a ball and rolling into its opponents.

From afar, not only will it use the former attack, but it will also fire singular projectiles that explode on contact, or fire three to four branching shots at foes.

Since its massive shell deflects all attacks, it cannot be defeated unless damage is dealt to its legs and face, which will force it on its back and expose its vulnerable underbelly.

Copies of the Megonta appear in Chapter 21, where they rise into the air and slam down on their opponents. Another copy appears in Chapter 24, in which it spawns on a staircase, bounces briefly, and rolls off the edge.

Megontas appear as enemies in the multiplayer feature Smash Run. Defeating them grants the player power-ups.

You wouldn't think a wood louse would make a very scary enemy, but when it's as big as this... Eek. It attacks by curling into a ball and rolling across the stage. There's no point in hitting its shell—it's solid. Instead, knock it onto its back with a smash attack, and then pummel its stomach while it's trying to right itself.

Megontas are giant pill bugs in the Forces of Nature. They ball up for protection, using their armored shells to deflect all attacks. A solid melee attack can send it on its back, exposing its weak underside!

AR Card of the Megonta. 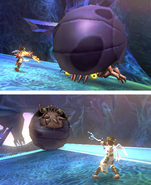