The Meteor Bow (新弓コメットエッジ Shinkyuu Kometto Ejji, God Bow: Comet Edge) is a Bow introduced in Kid Icarus: Uprising. It has the longest firing range of any bow. As its name suggests, this bow has a prominent charged shot which takes on the form of a large meteor. The meteor-shaped shot, despite its lack of homing ability, is very powerful.

The shots fired by this weapon have the longest range of any bow. While its charged shots are large and travel fast, they don't have much homing ability or power. Compensate for this with its heavy homing continuous fire. 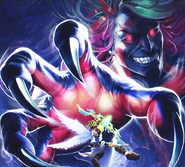 Pit using the Meteor Bow against Hades.
Add a photo to this gallery
Retrieved from "https://kidicarus.fandom.com/wiki/Meteor_Bow?oldid=51099"
Community content is available under CC-BY-SA unless otherwise noted.