The Midnight Palm (月光の破掌 Gekkō no Hashō, "Moonlight Breaking Palm") is a palm that debuted in Kid Icarus: Uprising.

Initially appearing as a dark purple orb with a yellow center, the Midnight Palm is a weapon that, once transferred to the user's arm, possesses light colored markings with a single rabbit-like pattern. In addition, the palm of the user's hand glows like moonlight, and crescent moon shapes whirl alongside the weapon's dusty aura.

The Midnight Palm is a weapon the player can use in-game, which can be obtained as loot, through fusion, or by completing a challenge in Hades's Treasure Hunt that requires the player to clear Chapter 13 with a palm on Intensity 9.0.

The Midnight Palm is geared toward defense, with ranged attacks that have a strong potential of nullifying incoming fire. It has powerful but slow shots. Its backward-dash charged shot crushes foes with a gigantic moon.

Artwork of the Midnight Palm.

AR Card of the Midnight Palm. 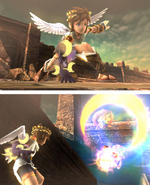 Retrieved from "https://kidicarus.fandom.com/wiki/Midnight_Palm?oldid=48117"
Community content is available under CC-BY-SA unless otherwise noted.