Miks (ミック Mikku) are Underworld enemies that debuted in the original Kid Icarus under the name Mick.

In the original Kid Icarus, the Mik is a green, round monster with a large mouth, square teeth, and multiple tentacles protruding from its backside.

In Uprising, it retains its appearance from before, only now its teeth appear more sharp, its tongue is longer and blue, and it possesses light green dots on its body.

Found in the Overworld stage, Micks swoop in from off-screen and attempt to ram into Pit.

While flying by or floating in place, Miks will attempt to shoot their opponents with singular projectiles or three smaller projectiles. Alternatively, it may also attempt to whip its long tongue at nearby foes.

Additionally, a Mik is required to form a Monomiknose, along with two Monoeyes and a Specknose.

A Mick briefly appears in the episode "Mr. & Mrs. Mother Brain." It attempts to attack Kid Icarus while he climbs Mount Icarus, though he swiftly defeats it.

It's easy to sum up a Mik—it's a large-mouthed monster. It serves as one of the Underworld Army's frontline troops, but maybe it would make a better food tester? Miks will eat just about anything, you know, and angels are right at the top of the menu.

Often deployed as the Underworld Army's advance guard, these floating mouths with whiplike tongues love to literally give their enemies a licking. They have an infinite appetite, and all attempts to put them on a diet have ended in tragedy.

The Mick as it appears in the original Kid Icarus.

AR Card of the Mik. 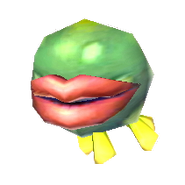 Retrieved from "https://kidicarus.fandom.com/wiki/Mik?oldid=46437"
Community content is available under CC-BY-SA unless otherwise noted.