When inactive, the Mimicutie appears to be an average blue and gold Treasure Box, only slightly smaller. When active, it will suddenly sprout humanoid legs from underneath, which sport brown, toeless shoes with gold trimming.

Only possessing a pair of legs, Mimicuties attack exclusively with kicks. As such, its main strategy is to home in on its foes and attack with a flurry of kicks, finishing the attack with a single, powerful kick that sends opponents flying. It may also home in on its foes with a series of sweeping kicks, and will occasionally drop loot upon defeat.

Mimicuties appear as enemies in the multiplayer feature Smash Run. Defeating them grants the player power-ups.

The Mimicutie appears as a collectable spirit in the game's aptly named Spirits mode. It is a Novice support spirit that can be equipped to increase the damage and power of foot and knee strikes.

This leggy monster disguises itself as a treasure chest until unsuspecting adventurers try to open it, at which point it attacks with a ceaseless barrage of kicks. Sadly, studies into Mimicutie have ended in more broken shins than answers.

Hey, look! That treasure chest probably contains stat boosts! Wait, why does it have two legs? Chest, where are you going?! ...Something about this just seems so unfair. Guess the best course of action is to avoid its rapid kicks and defeat it to earn those stat boosts.

AR Card of the Mimicutie. 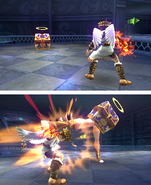