Minos (ミノス Minosu) are Underworld enemies that debuted in the original Kid Icarus.

In the original Kid Icarus, the Minos is a round monster with pink skin and blue eyes. It has a tooth protruding from both corners of its mouth, and a row of spikes lining its body from the bottom of its mouth to the back of its head.

In Uprising, it now has red, bumpy skin, yellow eyes with red pupils, and a yellow chin. The row of spikes now appears along its sides, and its fangs are more tusk-like than they previously were. In addition, it now has a small tail on its backside, and its round form balloons up upon receiving damage, revealing several sharp teeth within its mouth.

Appearing in the Overworld, Minos ambush their opponents by suddenly leaping out from the ground. Regardless of whether or not they hit Pit, they linger in the air for only a few seconds before retreating back into the surface.

Behaving differently from how they did in the original Kid Icarus, Minos gently float toward their opponents and charge into them. They inflate upon receiving damage, and should they be defeated, will explode and send spikes flying into the air.

Covered in spikes like a blowfish, Minos swells up when attacked. Although it looks cool and collected—even when fully puffed—Minos is actually seething with rage on the inside. Don't take it personally. 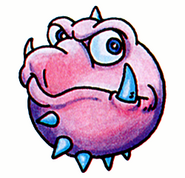 The Minos as it appears in the original Kid Icarus.

AR Card of the Minos. 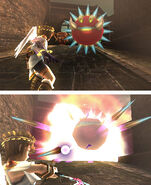