The Minotaur is the first of the three fortress guardians in Kid Icarus: Of Myths and Monsters.

The Minotaur is a large, bull-like creature with human qualities—it possesses the head, tail, and hooves of a bull, as well as the body, arms, and fists of a human.

Having been entrusted one of the Three Sacred Treasures by Palutena, the Minotaur appears as the first boss of the game.

Though its attacks are difficult to avoid, its strategy is simple: to launch an arch of skull-shaped projectiles at its foe, teleport to another platform in the form of a fireball, then repeat this process. 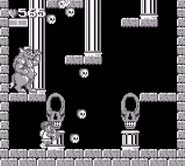