The Monoeye (モノアイ Monoai) is an Underworld enemy that debuted in the original Kid Icarus.

In the original Kid Icarus, the Monoeye is a pink, round monster with a single pink eye and multiple tentacles protruding from its backside.

In Uprising, its half-lidded eye is now blue, which turns orange when it fires at its foes.

Found in the Underworld stage, Monoeyes will swoop in from off-screen and attempt to ram into Pit.

Despite its description in the game manual, it does not possess the ability to paralyze Pit.

Being one of the most simplistic enemies in the game, Monoeyes will attempt to shoot singular projectiles at their opponents while flying by or floating in place.

Additionally, two Monoeyes are required to form a Monomiknose, along with a Mik and Specknose.

Monoeyes appear as enemies in the multiplayer feature Smash Run. Defeating them grants the player power-ups.

A Monoeye is a surveillance drone in the Underworld Army. Though it is capable of draining life from its target with its tentacles, a lowly Monoeye will never do so on prey like Pit. He's just too divine to touch!

These one-eyed monsters are members of the Underworld Army from the Kid Icarus series. In Smash Run, these scouts will usually attack alone and chase fighters. If their eye starts to glow red, they're preparing to fire a projectile. They're really weak, though, so you should have no trouble. 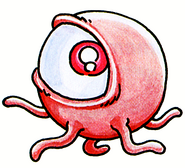 The Monoeye as it appears in the original Kid Icarus.

AR Card of the Monoeye.