In the original Kid Icarus, the Nettler is a pink, slug-like monster with two arms. It possesses a single blue eye and a yellow underbelly.

In Of Myths and Monsters, it appears to be more grub-like than before, no longer possessing a mouth or arms.

In Uprising, the Nettler reverts to its appearance from the original Kid Icarus, only now its eye is green and its underbelly is tan.

Found in the Underworld stage, the Nettler will automatically lock onto its targets and move toward them. It has the unique ability to dodge Pit's arrows by flattening itself to the floor.

Despite its description in the game manual, it does not possess the ability to reflect arrows.

Known as the Wormser, it is somewhat slower on the draw than it was in the original Kid Icarus, and cannot move while ducking.

The Nettler carries over its ability to flatten itself from the original Kid Icarus, dodging out of the way of most ranged shots. However, it no longer rams into its opponents, resorting to firing three branching bubbles instead.

Two Nettlers made an appearance in the episode "Mr. & Mrs. Mother Brain."

Originally a slug, this enemy has evolved arms and gained improved mobility in the process. While not very athletic, its reflexes are excellent. When fired upon, the Nettler can even use its soft body to squish itself flat and dodge attacks.

The Nettler as it appears in the original Kid Icarus.

The Wormser as it appears in Of Myths and Monsters.

AR Card of the Nettler. 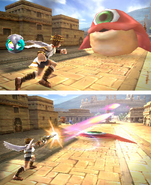 Retrieved from "https://kidicarus.fandom.com/wiki/Nettler?oldid=46615"
Community content is available under CC-BY-SA unless otherwise noted.