The Ninja Palm (忍の破掌 Shinobu no Hashō, "Ninja Breaking Palm") is a palm that debuted in Kid Icarus: Uprising.

Initially appearing as an orb, the Ninja Palm is a weapon that possesses black, armored plates with gold and red accents, along with Japanese symbols whirling around it, which transfers onto the user's arm once equipped.

The Ninja Palm is a weapon the player can use in-game, which can be obtained as loot, through fusion, or by completing a challenge in Hades's Treasure Hunt that requires the player to acquire all palms.

A weapon with the soul of a dark assassin. It has a short charge time, fires fast-moving shots, and boosts speed and agility. It even excels at melee attacks! On the other hand, it lacks in power, range, and homing. 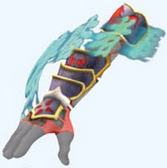 Artwork of the Ninja Palm.

AR Card of the Ninja Palm. 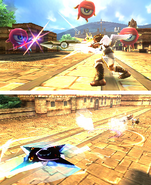 Retrieved from "https://kidicarus.fandom.com/wiki/Ninja_Palm?oldid=50658"
Community content is available under CC-BY-SA unless otherwise noted.