The Octos (オクトス Okutosu) is an Underworld enemy that debuted in the original Kid Icarus.

In the original Kid Icarus, the Octos is a round, yellow, octopus-like monster with green eyes.

In Of Myths and Monsters, it appears similar to its former appearance, only now its body contains more curves.

In Uprising, the Octos reverts to its appearance from the original Kid Icarus with some minor differences—its body is now primarily orange with yellow accents, its eyes are light purple, and it possesses a red cap atop its head.

Found in the Skyworld stage, Octos will leap out from below Pit and proceed to hop off nearby objects in an attempt to harm him.

Known as the Octus, they behave similarly to how they did in the original Kid Icarus.

The Octos will simply float in place and fire ring-shaped jets of ink at its opponent.

Appearing in the episode Videolympic, an Octos attacks Eggplant Wizard right before he can obtain one of the Three Sacred Treasures. This Octos is notably larger than its video game counterpart and lives underwater instead of in the sky.

An Octos is a flying relative of the octopus, a water-based animal you may have seen in monster movies. It sprays ring-shaped jets of ink from its mouth that looks fun to fly through but will hurt you if touched. 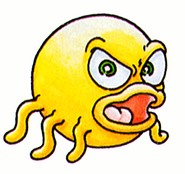 The Octos as it appears in the original Kid Icarus.

The Octus as it appears in Of Myths and Monsters.

AR Card of the Octos.
Add a photo to this gallery

Retrieved from "https://kidicarus.fandom.com/wiki/Octos?oldid=48406"
Community content is available under CC-BY-SA unless otherwise noted.