The Orne is a large skull with a horn protruding from either side of its head and jaw, and a purple aura surrounding the bulk of its body. When it opens its mouth, the Orne reveals multiple red and blue skulls within.

Orne sway from side to side as they slowly encroach on their enemies, attempting to make any sort of physical contact in order to instantly kill their prey. Their behavior may change depending on the chapter—it may stay in place, follow a set path, move toward Pit, or move away from Pit. They are resistant to all weapons, with the exception of the Arrow of Light.

Orne appear as enemies in the multiplayer feature Smash Run. Behaving the same way as they do in Uprising, they can instantly kill fighters in one touch and are invulnerable to all attacks.

This creepy ghost, covered in fire, first appeared in Kid Icarus: Uprising. If it shows up nearby, you'll hear eerie 8-bit music and get chased. Don't even think about fighting it—it's invincible and will instantly KO you if it touches you. Just run!

These vengeful ghosts seem to be formed from concentrated misery and regret. All who come into contact with Orne have their minds shattered, with death following shortly thereafter. They are attracted to the life force of their enemies. 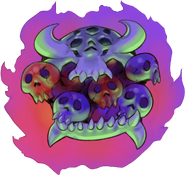 Alternate art of the Orne.

AR Card of the Orne.

The Orne as it appears in Super Smash Bros. for 3DS/Wii U.