The Palutena Bow (パルテナの神弓 Parutena no Shinkyū, "Palutena's God Bow"), formerly known as Palutena's Bow[1] or the Sacred Bow of Palutena,[2] is a bow that debuted in Super Smash Bros. Brawl.

Shown to be Pit's signature weapon, the Palutena Bow is made up of two gold blades, allowing it to be used as both a bow and a pair of swords. Its blades contain blue accents, and it possesses a brown handle, a red emblem that attaches to the back of the user's hand, and two halos that wrap around the user's forearm.

The Palutena Bow is a weapon the player can use in-game, which can be unlocked by completing a challenge in Hades's Treasure Hunt that requires the player to clear Chapter 24 within 11 minutes. Once unlocked, it can be obtained as loot or through fusion.

In Super Smash Bros. Brawl, Pit uses the Palutena Bow for nearly all of his attacks, splitting it into two blades for close-range combat.

Pit's bow in Super Smash Bros. for Nintendo 3DS/Wii U functions similarly to how it did in the previous installment, only now his Side Special has been replaced with the Upperdash Arm. Unlike Dark Pit's Silver Bow, its arrows have the ability to curve with relative ease after release—however, they are slightly less powerful.

Painstakingly crafted by Palutena herself, this bow's shots gain speed the farther they travel. Though its standing shots are weak, its dash shots are mighty. So keep moving, and don't leave yourself open to counterattacks!

The bow Pit got from Palutena after the Medusa incident. As a standard bow, it's capable of firing arrows of light that can change direction. It can also be split to form two short swords—Pit holds one sword in his right hand in a standard grip and one in his left in a reverse grip. He may hold them like this so he can shift between bow and swords without losing a beat.

A bow crafted by the goddess Palutena herself. It is said that one night, as Palutena was caring for this bow, the moon's light formed a beam and fell upon it, blessing it with power. A legendary weapon like this requires skill and training to wield effectively.

Pit equipped with the Palutena Bow in the cover art for Kid Icarus: Uprising. 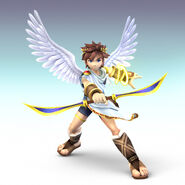 Pit wielding the Palutena Bow in Super Smash Bros. for 3DS/Wii U.

AR Card of the Palutena Bow. 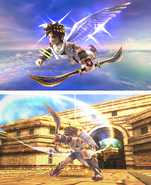 Retrieved from "https://kidicarus.fandom.com/wiki/Palutena_Bow?oldid=51196"
Community content is available under CC-BY-SA unless otherwise noted.