For unknown reasons, Pandora lost her physical form and was reduced to a fiery, ghostly ball of energy. However, after bathing in the Rewind Spring, she resurrects herself and reveals her true humanoid form, Amazon Pandora.

In both forms, she is voiced by Nika Futterman in the English version of Kid Icarus: Uprising.

In the original Kid Icarus, Pandora is an amorphous, bubble-like spirit with only the barest remnants of a face. Her eyes do not contain any irises and there seems to be no substance behind her ghostly facade.

In Uprising, Pandora has a much more ghastly appearance, seeming to be made up of a ghostly blue fire. She has a set of sharp teeth and wears a semi-translucent ring on top of her "head." She is also quite large in this form, being around 18'2" (553 cm[1]).

Known for her trickery, most of the things Pandora says or does are simply an act she puts on for others. That being said, she acts easy-going and sarcastic, and exudes an air of indifference regardless of most situations. This also makes her come across as unpredictable, as she constantly flips between her more subdued facade and how she truly feels.

She seemingly does whatever she pleases on a whim, no matter how impractical; such as building a driving course in her labyrinth to get her driver's license, or taking yoga lessons despite lacking limbs. However, it is impossible to tell just how honest she's being when she makes these claims.

Reflecting her penchant for trickery, Pandora has the power to create illusions. In her battle with Dark Pit, she plagues the battlefield with various traps. In her ghostly form, she attacks with fireballs and can turn invisible to elude Pit, as well as sink into the ground to attack him from below. In both forms, Pandora mainly attacks by creating bombs.

Pandora is the Gatekeeper of Skyworld's Fortress, guarding one of the three Sacred Caskets. Centurions are not very useful here, as Pandora can easily mow through them. Pandora's attacks are quite powerful, but she is also slow. This can be a lengthy fight due to Pandora's ability to hide herself and stay out of Bow range, but it is not hard if Pit stays close to her.

Pandora is entrusted with the Mirror of Truth and is placed in the Labyrinth of Deceit, staying hidden by the Great Reaper until Pit defeats him. As Pit traverses through her labyrinth, Pandora banters with him and Palutena until they finally reach her room. They engage in battle, then Pandora feigns defeat in order to trick Pit into destroying the Mirror of Truth, which inadvertently brings about the creation of Dark Pit. However, Dark Pit turns on her and promptly defeats her alongside Pit, then uses her remaining powers to grant himself flight.

A fake version of Pandora appears as one of the bosses of the chapter, created by Medusa.

Originally thought to be defeated for good, Pandora lived on inside Dark Pit's wings, hitching a ride with him throughout his adventures. Once Dark Pit arrives at the Rewind Spring, she uses the opportunity to separate from him and resurrect herself in the spring, turning her into her red-colored variant. After a brief battle, Pandora uses the spring once more to restore herself to her true form, Amazon Pandora.

Pandora appears as a collectable spirit in the game's aptly named Spirits mode.

As the goddess of disaster and calamity, Pandora builds the Labyrinth of Deceit, where she's thought to be using the Mirror of Truth to create Underworld troops. Though she sounds jaded, it's just an act, for she delights in trickery.

Pandora as she appears in the original Kid Icarus. 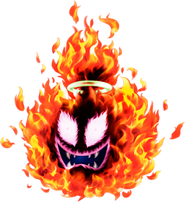 AR Card of Pandora from Uprising. 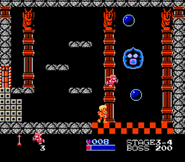 Pandora showing Pit the Mirror of Truth in Chapter 5.

Pandora, emerging from the Rewind Spring in Chapter 22.
Add a photo to this gallery

Retrieved from "https://kidicarus.fandom.com/wiki/Pandora?oldid=51375"
Community content is available under CC-BY-SA unless otherwise noted.