The Paw Pad Orbitars are a pair of weapons that float to either side of the user, resembling cat paws. Its right paw possesses ginger tabby fur, while its left paw possesses white and brown fur.

The Paw Pad Orbitars are weapons the player can use in-game, which can be obtained as loot, through fusion, or by completing a challenge in Viridi's Treasure Hunt that requires the player to acquire orbitars with a backward-dash charged shot modifier.

The Paw Pad Orbitars are too cute, aren't they? They have a short charge time, and shots bounce about like an excited kitten. Shield yourself with the backward-dash charged shot, or circle around enemies using continuous fire.

Artwork of the Paw Pad Orbitars. 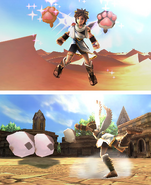 Retrieved from "https://kidicarus.fandom.com/wiki/Paw_Pad_Orbitars?oldid=51228"
Community content is available under CC-BY-SA unless otherwise noted.