Lightning Flash Phosphora (電光のエレカ Denkou no Ereka, "Eleka the Lightning") is the boss of Chapter 14 in Kid Icarus: Uprising and one of Viridi's commanders of the Forces of Nature.

She is voiced by Kari Wahlgren in the English version of Uprising, and by Stephanie Komure in Super Smash Bros. for Nintendo 3DS/Wii U.

Phosphora is a blonde-haired human-like girl with purple eyes, looking to be 16 or 17 years old[1] and standing at around 5'7" (170 cm[2]). She adorns a blue scarf that can conduct electricity, causing it to levitate and become rapturous when Phosphora harnesses electricity. She wears a small, black top ending at the midriff, overlapped by two white sashes, and white shorts. She wears open-toed boots made up of black wrappings and has a green-leaved vine wrapped around her body from her arm to her thigh.

Phosphora is a rather sassy individual, shown to be rude to her opponents and seeming to enjoy getting under their skin. She attempts to locate and exploit the weaknesses of others to achieve this goal, such as when she flirted with Pit or made a jab at Palutena's age.

She also possesses a rather nonchalant attitude towards most things, brushing off comments and events as nothing but a minor nuisance to herself. Despite these factors, she shows the utmost respect to her goddess Viridi, loyally obeying her orders and referring to her as "mistress."

As her title implies, Phosphora has the power to manipulate electricity for a number of purposes. With this, she can turn into a bolt of lightning, move at incredible speeds, and teleport. Phosphora can fire bolts of electricity at opponents and electrify the air around her. Phosphora can also use her electrokinesis to create storms. However, if she expends energy too fast, she tires easily and must recharge.

Palutena sends Pit out into the sky, where he immediately comes under fire. As Pit wonders what is going on, Palutena relays some horrible news: both the Underworld Army and the Forces of Nature are now at war with each other, giving Pit two armies to contend with at once. The two watch as both armies lock in a fierce battle with one another, Viridi's side being led by her commander Phosphora, while Hades's side is led by the newly revived Thanatos. As the feuding commanders rapidly zip around the stormy skies, Pit follows closely behind them, and shortly after witnesses Phosphora deal a final blow to the god of death. She then retreats into a massive thundercloud to regain her strength, though Palutena keeps Pit hot on her heels in order to take advantage of her weakened state.

Pit lands and traverses through the abandoned Thunder Cloud Temple, which Phosphora now takes refuge in. The angel begins to cut off the power supplies within it, though Phosphora seems unconcerned by this; instead, she pokes fun at Pit and Palutena, even flirting with the former in an attempt to fluster him. However, her attempts to deter them are unsuccessful, as Pit reaches the temple's center regardless and engages her in battle.

After her defeat, Phosphora tells Pit that she takes back her earlier flirtatious remarks before disappearing in a flash of light.

Once Pit crashes through the barrier to Palutena's Temple, he is thrown out of the Lightning Chariot, causing the vehicle to charge aimlessly across the sky. Phosphora zips after it, stating that she'll hold onto it in the meantime. Though she doesn't help Pit in his mission, she chimes into his conversation with Viridi when he lashes out at the goddess.

When Dark Pit later uses the Lightning Chariot to split open the portal to the Chaos Vortex, the dark angel is thrown out of the vehicle, prompting Phosphora to zip after it once again.

While she isn't playable, she appears as an Assist Trophy, where she zips across the stage and fires lightning bolts at her foes. She will flinch if an opponent attacks her, which will temporarily stop her from attacking.

A beautiful and powerful electricity-based warrior in the Forces of Nature. While victorious in her battle with Thanatos, the wounds Phosphora receives make her weak in the fight with Pit that follows. 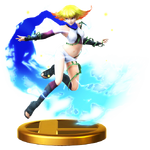 Phosphora is a young, beautiful, fierce commander of the Forces of Nature. She also has control over electricity, letting her move at shockingly high speed. When I write it out like that, it sounds like she has everything! Well, I did hear she isn't a great singer...

Phosphora, before her boss battle in Chapter 14.

Phosphora as an Assist Trophy in Super Smash Bros. for Wii U.
Add a photo to this gallery

Retrieved from "https://kidicarus.fandom.com/wiki/Phosphora?oldid=51373"
Community content is available under CC-BY-SA unless otherwise noted.