The Predator Cannon is a large, gun-like weapon that resembles a dragon—its muzzle is shaped like a dark green dragon head with silver fangs, yellow eyes, and red eyebrows, while its green body has silver scales on its underbelly and amber protrusions resembling claws.

The Predator Cannon is a weapon the player can use in-game, which can be obtained as loot, through fusion, or by completing a challenge in Palutena's Treasure Hunt that requires the player to clear Chapter 5 without dying on Intensity 5.0 or higher.

This cannon raises movement speed and has the strongest melee attack of its weapon type. Upon exploding, its shots deal repeated damage, and its backward-dash charged shot fires an arcing shell that descends on the foe.

AR Card of the Predator Cannon. 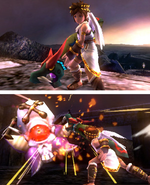 Retrieved from "https://kidicarus.fandom.com/wiki/Predator_Cannon?oldid=51218"
Community content is available under CC-BY-SA unless otherwise noted.