Fighting in a similar manner to her true counterpart, she is one of the bosses of Chapter 24.

At first, Pseudo-Palutena appears to be an exact replica of Palutena. However, once her true form is revealed, she takes on a more grotesque, zombie-like appearance. She has spotted, purple skin, with a dangling jaw that shows her teeth and long tongue. One of her yellow-tinted eyes is squinted and appears to lack a pupil, while the other remains wide open.

While the true extent of Pseudo-Palutena's power is never shown, she uses the same powers that Palutena uses to attack Pit in Chapter 20.

However, once her mask of beauty is destroyed, she becomes more aggressive. When she's in her true form, she upgrades her arsenal of Palutena's magic with a barrage of pink energy shots. She also uses a melee attack, which involves her smashing her own face into the ground below her, hitting Pit in the process.

Upon defeating Magnus and Gaol, Pit discovers his next opponent is Palutena, much to his dismay.

He reluctantly attacks Palutena, who sounds much more violent than usual. After a few hits, she reveals her true form as Pseudo-Palutena and continues the battle, which becomes more difficult as her array of attacks increases. She is not shown again after her defeat.

Pseudo-Palutena appears as a collectable spirit in the game's aptly named Spirits mode, where she increases the user's transformation duration (ability to maintain transformations from items, such as the Super Mushroom, for a longer amount of time).

A twisted version of Palutena created by Dyntos as a joke. During the appearance of Pseudo-Palutena, Dyntos put the real goddess to sleep miles away. This amazing feat is evidence that Dyntos's power exceeds even that of Hades.

A creation of Dyntos, the god of the forge, this distorted version of Palutena will attack Pit verbally and physically. Destroying her illusion of beauty only makes her more aggressive. Dyntos puts the real Palutena to sleep during battle, forcing Pit to tackle this creature alone. 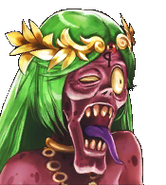 Retrieved from "https://kidicarus.fandom.com/wiki/Pseudo-Palutena?oldid=50239"
Community content is available under CC-BY-SA unless otherwise noted.